The cryptocurrency market remains in a state of indecision. While it has ended the slide from a total value of $2.6 trillion to $1.3 trillion, it has failed to rebound beyond $1.5 trillion. At the same time, while some of the biggest coins have risen strongly in the past week, others have flatlined or gone backwards. However, this stagnation arguably presents a good opportunity to make some big gains. As such, we’ve picked the 5 top cryptocurrencies to buy this week. These include coins that may bring a short-term spike, as well as those with more long-term potential.

5 Top Cryptocurrencies To Buy This Week

As the chart above shows, bitcoin’s support level has gradually risen since the end of June. It has risen steadily from the $30,000 level to $32,000, $33,000 and now almost $34,000. In other words, it’s becoming a safer buy, although its resistance level is failing to rise in parallel.

This increase in bitcoin’s support level has been caused by bigger players gobbling up BTC at a discount. As the tweet below indicates, the quantity of BTC on OTC desks is falling.

#Bitcoin balance on OTC desks continues to decline as bigger players continue to accumulate at these lower levels.https://t.co/7q63SMp574 pic.twitter.com/yHimkIJY4d

Similarly, the supply of BTC on exchanges is also slipping downwards. While the effect is unlikely to be immediate, this accumulation suggests that the market is preparing for an eventual surge. This is why it’s one of the top cryptocurrencies to buy this week, and why it will probably be one of the best to buy for the foreseeable future.

#Bitcoin balances on exchanges flattening out again after a large wave of inflows in May.https://t.co/8mQEOqTf06 pic.twitter.com/ziTBBbEI6m 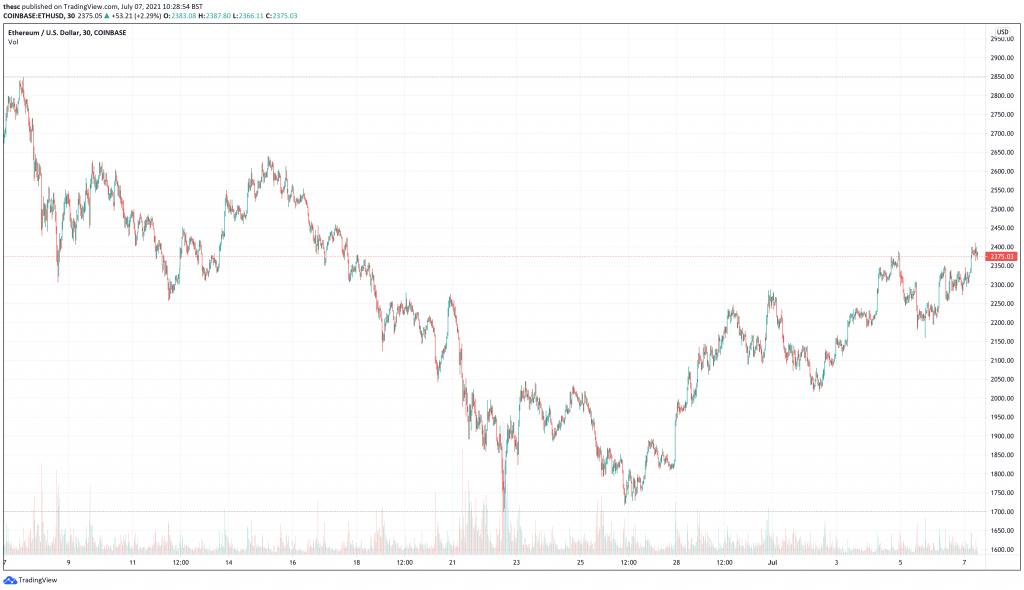 However, despite falling as low as $1,700 on June 26, ETH has since bounced back. Its support and resistance levels have both increased in parallel, and it seems to be gaining new momentum.

It’s likely that the approach of Ethereum 2.0 is the biggest factor in ETH’s recovery. Data from Dune Analytics shows that 6.2 million ETH has now been staked in Ethereum 2.0’s smart contract. This will only increase as the final launch of Ethereum 2.0 — due at some point in late 2021 or early 2022 — nears. It’s also likely to increase for as long as the wider market remains relatively stagnant, with staking currently guaranteeing an APR of 6.3%.

Certain analysts have even suggested that as much as 30% of circulating ethereum could be staked after Ethereum 2.0 goes live. This could have a massive effect on ETH’s price, particularly when only 5.3% of the current supply is locked up right now.

Uniswap (UNI) is a cryptocurrency whose time has come. It’s currently priced at $23, representing a 6% rise in the past 24 hours and a 23% rise in the past week. Impressively, it has also risen by 40% in the past fortnight. That said, it is down by 11% in the past 30 days and down by 49% compared to its ATH of $44.92. Of course, such declines are in line with the rest of the market. 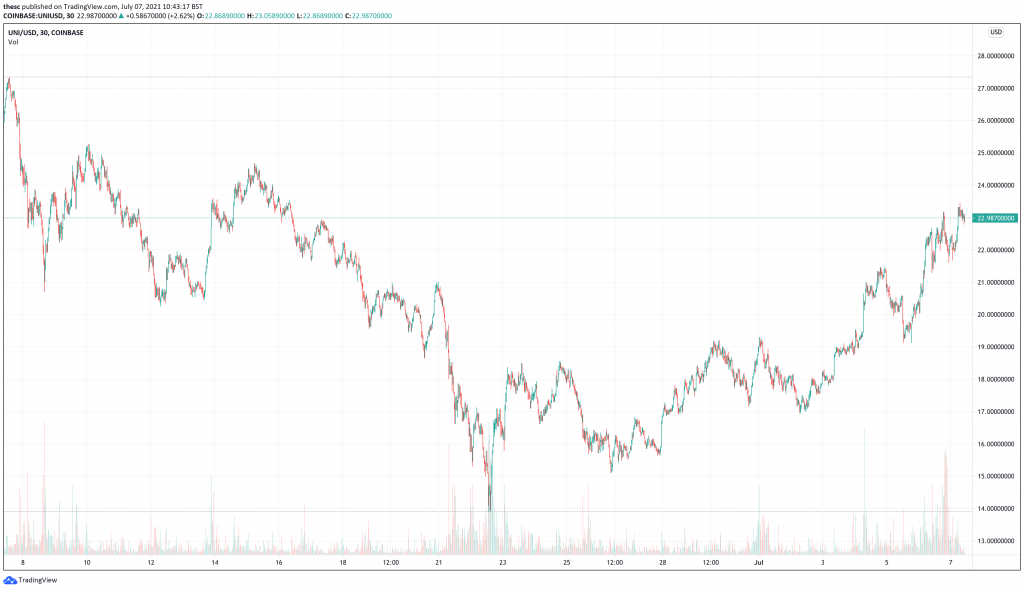 A big part of UNI’s recent rise is hype surrounding the launch of Uniswap V3. This is the third version of the decentralised exchange (DEX). It brings a range of improvements, including better order execution and greater capital efficiency for liquidity providers.

🦄 We are thrilled to announce that Uniswap v3 is now live on Ethereum mainnet!https://t.co/liqYXtQoM2 has been updated to support v3.https://t.co/VeR2ueZfEk

More recently, Uniswap has introduced liquidity mining. This means that users can earn extra tokens in return for staking tokens. This has likely increased demand for UNI, with the token’s price rising by around 27% since the feature was announced.

🌊 We’re very excited to share that the Uniswap v3 liquidity mining contracts have been deployed to Ethereum mainnet and all testnets.

As for the long-term, Uniswap arguably has a very bright future as a DEX. Recently, Binance — a centralised exchange — has received plenty of negative attention from regulators and banks. However, as a decentralized exchange, Uniswap is less likely to suffer such resistance. Its recent rise may therefore be the product of the market pricing in its future avoidance of regulatory pullback. If so, it certainly deserves a place as one of the top cryptocurrencies to buy. 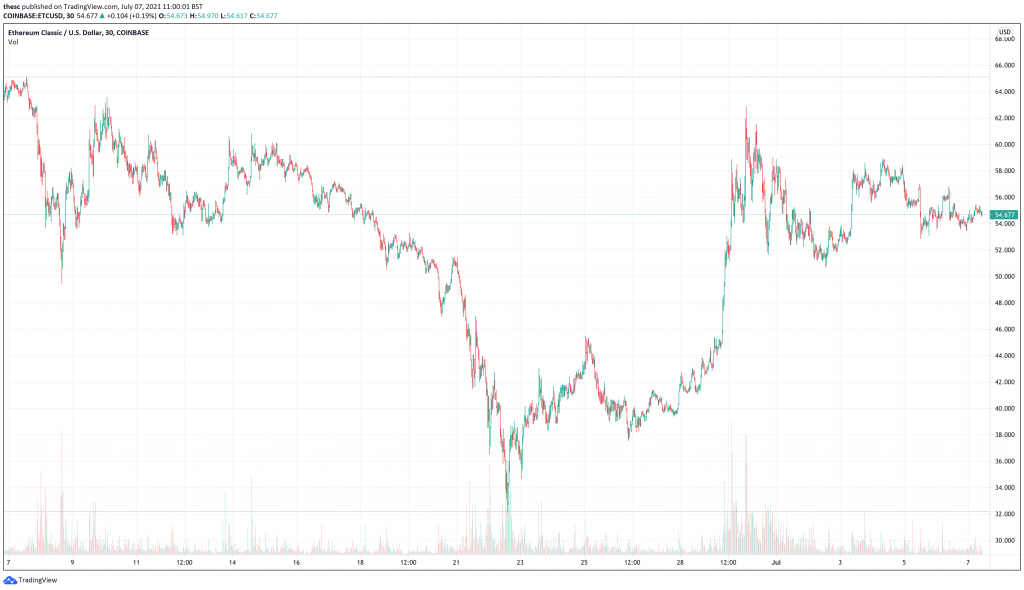 This is a big dip, but it suggests that ETC could rebound vigorously. This is made all the likelier by the fact that the cryptocurrency will benefit from the launch of Ethereum 2.0. With Ethereum’s move to a proof-of-stake system, miners will have to shift to a new blockchain. Ethereum Classic is the prime candidate, since it shares a similar algorithm to Ethereum.

With miners flocking to Ethereum Classic, its strength as a network will only grow. In parallel, the depth and liquidity of the ETC market will increase. This is likely to push up the price of ethereum classic in the long run. 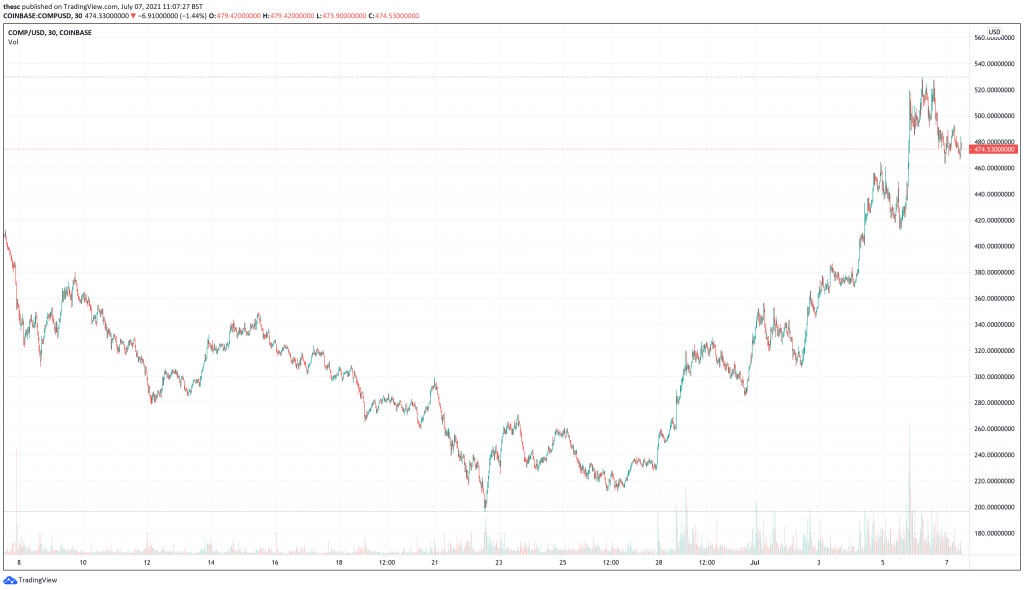 Most recently, it has launched its Compound Treasury service. This lets digital banks and fintechs access the Compound DeFi system, enabling them to earn interest of 4% on US dollar deposits. The service is currently available only in California, but will be rolled out to other states soon. It’s likely to increase demand for COMP considerably in the near future.

Compound Treasury is currently available to customers in California.

Learn more at https://t.co/4iaoNvTlFj, or contact us at [email protected] 📈

Despite a Shaky Ethereum, the NFT Market Is Booming

Key Takeaways The NFT market is soaring despite a wider downturn in the crypto market. Collections like mfers, NFT Worlds, and Edenhorde have rallied over the last few days. Several OpenSea competitors have also emerged […]

Ethereum Making People Rich NOW (Too Late for You in 2021?)

Singapore’s income tax treatment will be determined based on the nature and use of the NFT. Taxing NFTs According to the latest report by The Business Times, Singapore Finance Minister Lawrence Wong while addressing the parliament […]